Moment in the making of a global feminist anti-VAW movement – Charlotte James Robertson reflects on The Brighton conference in 1996 and how far the movement has come. 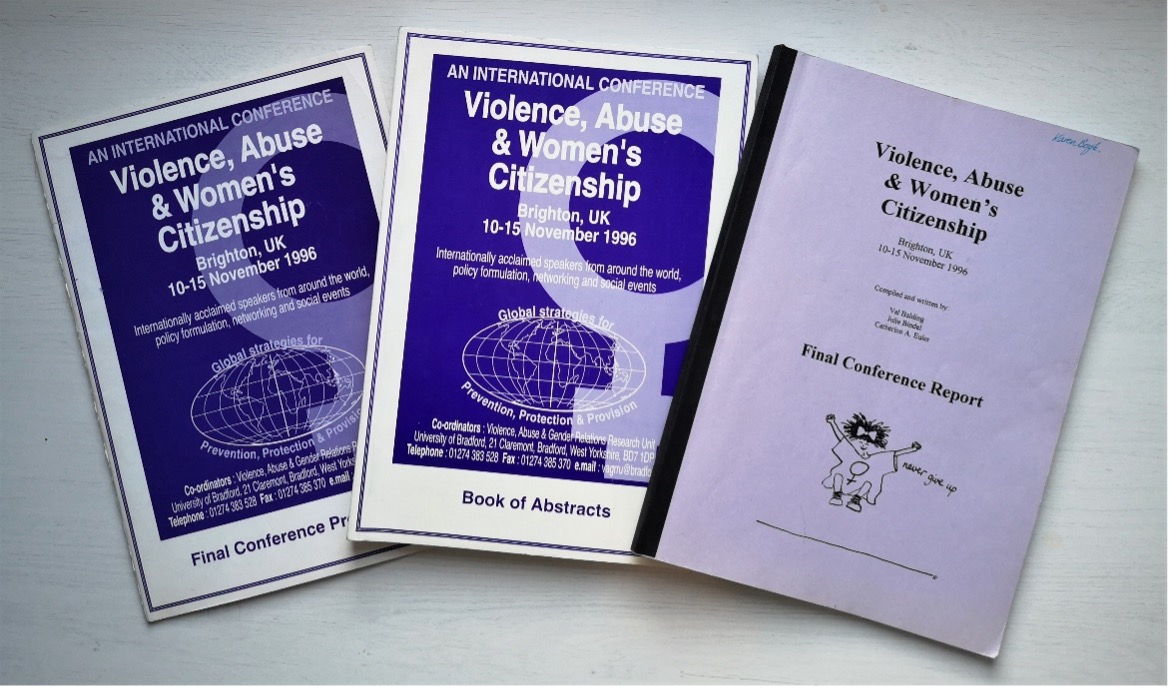 [1]: ‘It Takes a Global Village to End Gendered Violence’

In November 1996, 2,500 people from 137 countries converged on Brighton, England, for the ‘International Conference on Violence, Abuse and Women’s Citizenship’.[1] Those who attended the conference recall it as the remarkable culmination of two decades of feminist activism against gender-based violence. The Chair of the conference’s Steering Group, Jalna Hanmer, described it as ‘emotionally demanding, physically exhausting and exhilarating all at once’.[2] Al Garthwaite, pioneer of the Reclaim the Night movement, described it as ‘one of the most significant weeks in my life.’[3] The Brighton conference covered a multitude of issues effecting women and girls, including rape, sexual assault, harassment, domestic violence, child abuse, forced marriage and female genital mutilation.

International conferences are slowly becoming a possibility again but what are the benefits of this? What did the participants of the Brighton conference value about the experience and how successful was the conference at including the voices of all women working on gender-based violence?

‘A City Full of Women’

Angela Beausang, then chairwoman of ROKS, the National Organisation of Battered Women’s Shelters (refuges) in Sweden, recalled the conference thus:

‘A city full of women and feminists as well, it was a dream come true. It took me a couple of days to get the hang of finding time for as much as possible… you had to plan your participation very carefully!’[5]

Beausang captured how overwhelming yet exciting it was to share a space with so many passionate women. Learning about what others had achieved gave women a renewed sense of possibility for what could be done in their home countries. As explained,

‘it is conferences like this, where networking on the global level gives women the impetus to persevere in their own communities’.[6]

Another reason for planning participation carefully was the emotionally challenging content of papers and sessions. For example, the effect of armed conflict on women was a significant theme. Testimony from women living in the ‘Former Yugoslavia’ and Afghanistan highlighted war crimes against women, whilst many participants were moved when two women, one Palestinian and one Israeli, took to the stage to discuss their joint refuge provision project.

The conference programme shows that this was a truly international event that included a diverse range of activist and academic voices. There were panels dedicated to discussing violence experienced by lesbian and disabled women as well as papers that considered the impact of race on experiences of gender-based violence. Patricia Connell, who was a PhD student at the time working on African-Caribbean women’s experiences of domestic violence, noted that the conference speakers and participants tried to widen the scope of the movement and to recognise the diversity of women’s positionality globally.[7] Connell recalled anti-violence advocate and criminologist Beth Richie’s paper, which called for a more contextualized and intersectional analysis of gender-based violence, as a highlight of the conference.

However, while the public memory of the conference is overall a positive one, there is also evidence that some women’s voices were marginalised. For example, there were two protests at the conference, one by a group of Black women and one by a group of disabled women, who felt their concerns were not being adequately addressed. Irish feminist activist Ailbhe Smyth also reported that there were no Black keynote speakers from Britain.[8]

These voices of appreciation and protestation are both important aspects of the way this conference should be remembered. Moreover, these were not binary experiences. Some women who voiced criticisms of the conference still appreciated the opportunity for debate and knowledge exchange. Challenging one another and grappling with uncomfortable issues are important aspects of creating transnational solidarity. The knowledge that there were other people campaigning around these issues could be incredibly reviving for activists who often had little recognition for their work.

Reflection on the more critical perspectives voiced is especially valuable in examining how much progress we have made on these issues since 1996. It is true that intersectionality is a key analytical approach adopted by many activists and academics working on gender-based violence in the present day.

However, LGBTQ+ people, women of colour and disabled women continue to be disproportionately affected by gender-based violence and there is still much work to be done. While the buzz of an in-person conference cannot be replicated, social media and video conferencing have made it easier for people to access and create transnational spaces of exchange. These are important tools for listening to and centring a more diverse range of voices in future projects on gender-based violence.[9]

Charlotte James Robertson is a doctoral researcher at the University of Glasgow’s Centre for Gender History. Charlotte examines the feminist movement to establish women’s refuges and other services for victims/survivors of domestic abuse. Her thesis is entitled “‘Towards Sisterhood?’ Women’s Aid in Britain and the women’s refuge movement as a transnational endeavour, 1971-1996” and is funded by the Arts and Humanities Research Council. Charlotte holds an MA in History from the University of Glasgow and an MSc in American History from the University of Edinburgh. She is the convener of the Hufton Postgraduate Reading Group. Her research interests include transnational and intersectional approaches to the history of feminism, the history of Women’s Aid and oral history. She also works part-time for the National Library of Scotland. You can tweet her @CharJamesR or get in touch: charlotte.jamesrobertson@glasgow.ac.uk

[9] The women-led volunteer organisation FiLiA have recently won funding to digitise and share audio recordings from the conference https://filia.org.uk/latest-news/2021/1/7/7th-january-2021?rq=brighton