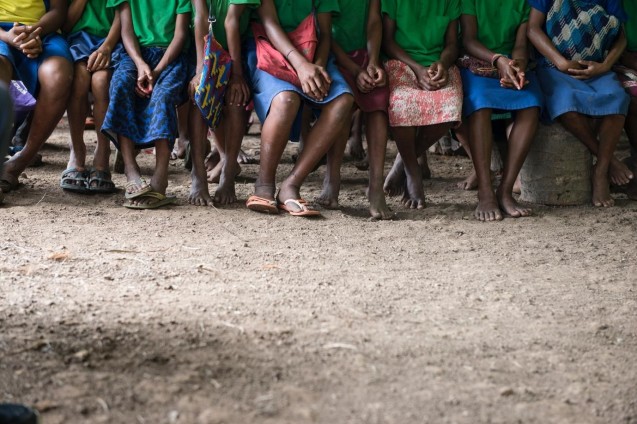 In 2019, Save the Children, ChildFund, Plan Australia, and World Vision co-authored a report – Unseen, Unsafe – which looked at the physical, emotional and sexual violence, as well as neglect faced by children living in the Pacific and Timor-Leste.

The report found that over 70 per cent – or 4 million – children across eight countries experience violent discipline at home. This includes 2.8 million children (or 75 percent of the child population) in Papua New Guinea. It isn’t just the scale of violent discipline that is troubling, but also the extreme levels of violence. Data obtained from Save the Children’s child protection program in Papua New Guinea, for example, reported that 27 per cent of parents or carers acknowledged beating their children “over and over as hard as they could”.

What causes violence against girls?

There are a number of drivers of violence against girls in the Pacific and Timor-Leste (just as there are globally). In this region, the Unseen, Unsafe report found that violence tends to be widely accepted as a form of legitimate discipline and children do not enjoy a high status. If a young girl experiences an unwanted pregnancy or contracts a sexually transmitted disease, access to health and support services are often limited, while pronounced levels of gender inequality, poverty and economic stress, and weak child protection systems only compound the issue.

There are particularly strong prevailing gender norms in the Pacific and Timor-Leste, with unequal gender power relations and discrimination driving high levels of violence against women and children. Many communities are deeply patriarchal, and this is sustained through traditional ideologies, customary practices and powerful religious influences. These gender hierarchies are reproduced from generation to generation; as one young girl from Morobe, in Papua New Guinea, said: “Witnessing violence in the home or in the community will have some effect on the child. When these young boys witness it every time they will grow up to be violent – because they will think it is normal”.

Economic factors and weak protection systems exacerbate violence against children, and girls in particular. In the Solomon Islands, for example, the rapid growth of extractive industries such as logging and fishing has been associated with an increase in the commercial and sexual exploitation of children, including a rise in ‘Solair’ activity. Solairs are intermediaries who arrange local girls for sex for foreign logging or fishing workers. These arrangements might arise from personal requests from individual foreign workers or a request from local managers or supervisors at the company. Despite this being well-known, few safeguards have been put in place to monitor and prevent the exploitation of young girls near the logging sites. National legislation – such as the Child and Family Welfare Act 2017 and the Family Protection Act 2014 – purportedly offer protection, but a lack resources means that these laws are rarely implemented. As a result, informal village-level mechanisms are frequently invoked, though these are often woefully inadequate; fines of only SBD$50 (approximately USD $6) are imposed for the offence of “selling of female members of the community for sex for personal monetary gain or beer”.

There are, perhaps unsurprisingly, no easy answers to a problem that is so widespread and seemingly entrenched. The issue of violence against children and girls needs to be addressed on multiple levels, changing the dynamics in homes, families, communities and entire societies. The drivers of interpersonal violence are incredibly complex, and so must be the means of addressing the root causes. Changing harmful social and cultural norms and behaviours involves cooperation between multiple sectors and stakeholders, from national governments, civil society groups, religious and community organisations. It includes mobilisation programmes directed at changing norms, training programmes for parents and children, and the establishment and continued support of frontline response services.

These programmes are working and making a difference in the lives of countless girls. But for this work to continue, governments and other major donors need to make a meaningful contribution to ending violence against children, plain and simple. The Unseen, Unsafe report is unequivocal in finding that more targeted aid expenditure on ending violence against children is needed to address the epidemic.

We know that money alone isn’t the answer to ending violence in the region, but without funding, progress is impossible. This places the wellbeing of countless young girls in our region in danger and keeps girls unseen, and unsafe.

Kavitha Suthanthiraraj is the Policy and Advocacy Advisor at Save the Children Australia and author of ’Unseen and Unsafe: Underinvestment in Ending Violence Against Children in the Pacific and Timor-Leste’

Caitlin Hamilton (@_CaitHamilton) is the Postdoctoral Research Associate at the Australian Human Rights Institute and editor of ’Unseen and Unsafe: Underinvestment in Ending Violence Against Children in the Pacific and Timor-Leste’.