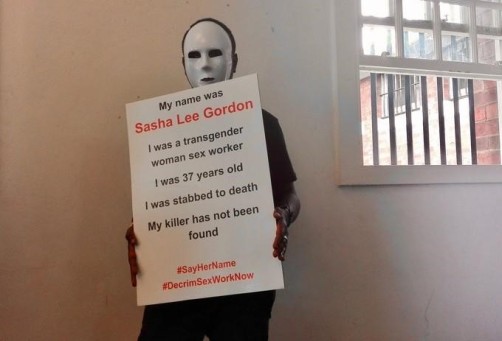 Image of a person carrying one of the #SayHerName campaign placards, by – and used with the permission of – the Sex Workers Education and Advocacy Taskforce

Sex work can simply be understood as the exchange of sexual services for some form of monetary value. More officially, UNAIDS (2001) defines sex work as “any agreement between two or more persons in which the objective is exclusively limited to the sexual act and ends with that, and which involves preliminary negotiations for a price”.

Under Act 23 of the Sexual Offences Act (SOA) of 1957, sex work is fully criminalised in South Africa. The Act is a remnant of the apartheid regime’s Immorality Act of 1927, which criminalised sexual interactions across racial lines; specifically prohibiting sex between Black (African, Indian and Coloured) and White (Afrikaner and European) people. In 2007, the law was amended to include the purchasing of sex – until then, only the selling of sex had been criminalised. Currently the sex worker, client and anyone living off the earnings of a sex worker is considered a criminal. However, since it is difficult to prosecute someone for engaging in sex work (unless caught in the act), authorities tend to rely on entrapment, and municipal by-laws such as loitering, to arrest sex workers.

South Africa’s unemployment rate went up during the second quarter of this year from 27% to 29% (of a total population of about 58 million), and is most notable amongst Black African women, who form approximately 35% of this overall national unemployment statistic. Therefore, poverty is still highly feminised and racialised in South Africa. It should then not be surprising that, under these socio-economic conditions, many Black women turn to sex work as the only (or most) viable option for making a living.

According to a 2013 sex worker population size estimate study, there are approximately 153,000 sex workers in South Africa, with about 138,000 being women (which amounts to nearly 0.9% of the country’s female population), and most of whom are Black. Around 70% are street-based.

In addition, according to the Gould & Fick 2008 study sex workers with a primary school education are able to earn nearly six times more doing sex work than they would from formal labour such as domestic work. On average, female sex workers support around four dependents, while their male colleagues about two. The same study also notes that the average age of debut into sex work is 24 years, with the average length of stay in the industry being 12 years. 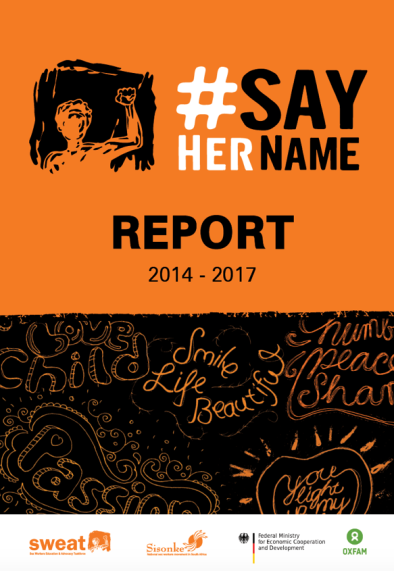 Cover of SWEAT’s #SayHerName Report 2014-2017, reproduced with the permission of SWEAT

During 2014 to 2017, the Sex Workers Education and Advocacy Taskforce (SWEAT) and the South African national movement of sex workers called Sisonke (meaning ‘we are together’ in isiZulu) received reports of 118 cis- and transgender women sex workers who had died as a result of violence. These were compiled into the SWEAT #SayHerName report, which noted that more than 50% of the deaths reported during this period were the result of murder. Of the reported murders, many of the deceased had also been sexually assaulted. Indeed, most of the documented killings included acts of severe brutality; such as repeated stab wounds, mutilations, acid burns and even decapitation.

Another recent (2019) study by the Human Rights Watch (HRW) ‘documents how the criminalisation of sex work fuels human rights violations against sex workers, including by police officers, and undermines their right to health’. HRW interviewed 46 women currently working as sex workers in the country, with about 75% reporting having been arrested more than once. One woman explained:

In some instances, sex workers are even arrested just for being in possession of one too many condoms; a preventative mechanism to help fight the HIV/Aids pandemic in the country. South Africa has the highest number of people living with HIV at an estimated 7 million, which is about a fifth of persons living with the virus globally (SANAC 2018). In addition, when the (predominantly male) police enforce criminalisation, there is often a gender bias; they tend to detain the sex worker (or ask for sexual favours in exchange for being released), while letting the client go on a warning (or bribe).

So while the world commemorates the 16 Days of Activism Against Gender-Based Violence, we urge you to also remember that sex workers in South Africa remain marginalised, abused and, all too often, killed because of criminalisation. Our government’s lack of response and regressive engagement on the issue of decriminalisation further perpetuates and prolongs the suffering of sex workers.

Decriminalisation of sex work would help create safe working conditions for adult consenting sex workers to operate under. It would also enable sex workers to report the abovementioned violations, and freely access basic social, legal and primary health care services without stigma and discrimination. Ultimately, it would afford sex workers equal access to labour and human rights, as all. To find out more about SWEAT, Sisonke and how you can support the struggle for sex workers’ rights in South Africa visit our website.

Ntokozo Yingwana is a doctoral researcher at the African Centre for Migration & Society (ACMS), Wits University.

Lunga Luthuli is the membership and communication officer for Sisonke.